The Study is a room located on the first floor of the Mansion, which can be accessed by following the long corridor from the main hall along the window-side and moving up the first flight of blue-carpeted stairs. It requires a Key

to open, which can be found behind the

painting of a Sarcophagus. Lighting the two candle sticks on each side of the painting with the matches in our bag, reveals a hidden alcove, containing the Key and a damaging defense mechanism, which we should hence avoid standing in front of.

Upon entering the Study for the first time, Adam meets an apparition of his father, put in chains and begging him to free his restless soul. Around his neck he is wearing a

viridescent pendant, which he refers to as "[his] prison and [his] jailer". Charles also vaguely speaks of an imminent and very serious conflict between two adversaries he does not explicitly name. He does mention Aelf, though, advising his son to find him, as he will be like a brother to him and provide guidance. Adam's father is, then, seized by four armoured figures and vanishes.

In the name of the Father.

The Study is habitually and hospitably furnished with various bookcases, a fireplace and a silver coatscuttle, as well as various seating accommodations placed in front of it. To the left side of the entrance there's a commode, however the drawers are stuck and the canopy's lock has been melted. From the nearby weapon rack we manage to pull out a rusted, but still useful

Broadsword. In front of the window side we spot a writing table, the bookcase next to it contains a hidden door which leads to the Mausoleum.
Additionally, the room is richly decorated with various thrusting and slashing weapons (some of which Adam identifies as a Scimitar and a Claymore), various coats of arms, three masks, and a number of mostly inconspicuous paintings of people and landscape art, with one notable exception: a painting depicting Florentine, holding a book which Rebecca identifies as his journal.

In the Mansion's Study, there's a long and intricately- In the centre of the room lies an intricate rug which according to Rebecca has some sort of device, an icon, woven into it. Judging by the residual, though clearly perceptible power radiating from it, it was supposedly used for magical rituals. This hypothesis is further invigorated by the fact that the rug's weave contains silver and gold, precious metals which were preferably used in the conjuration of demons. We could also argue that the rug has teleportative properties: when using Florentine's Staff on the Tower Gate in the Observatory, we end up right on the icon of the rug.

Taking a look at the writing table in the back of the room, we find that it has been used recently, with Rebecca commenting how the dust on the desk pad has been disturbed, attesting to somebody else's presence in the house. In addition to

1 Colt-45 Magazine, we collect an assortment of

3 Letters from the table, all pleasantly scented, without address or postage though, sent from a certain R.J. to Claude Florentine.

Next to the desk stands a

Longcase Clock which has stopped at 8 o'clock. The hands don't work anymore but oddly enough, the clock is still ticking. When manually setting the clock to 6 o'clock, it will chime and open/close of its own accord. This can be interpreted as a hint for a puzzle segment which is encountered later on, specifically inside the large floor clock hall just before entering Hawk's Prison.

On the right-hand side of the clock is a sideboard with an old-fashioned Gramophone, along with a couple of disks, that can be switched on, playing curious and unsettling sounds of what seems to be a weeping baby as well as a laughing woman and man.

Throughout this room are spread several gold leaf

Serpent Statuettes which are part of the puzzle surrounding the

Sarcophagus, set up next to the entrance door. Adam needs to collect all seven of them (some of which can only be found later on) and place them on the circular indentations in front of the Egyptian receptacle. Upon putting the last one in its place, the statuettes will start to glow and the Sarcophagus will open up and reveal a new passage leading to Hawk's Prison.

The Sarcophagus also serves as a teleporter between various locations in the Mansion, provided that Adam is in possession of

large door inside the Mausoleum). It's a convenient shortcut, in case you've missed the Serpent Statuette that's hidden in one of the alcoves.

Florentine.
Holding his Journal. Below the three Masks.

Sarcophagus.
Opens when placing 7 Serpent Statuettes on the indentations in front of it.

Commode.
The drawers are stuck and the canopy's lock has been melted.

Rug.
Apparently used for conjuration, judging by the precious metals that are woven into it.

Gramophone.
Sounds of a weeping child, a laughing man and woman. 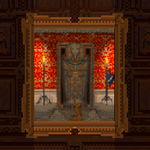 Sarcophagus.
At the end of the hallway which leads to the Study, secret repository of the Study Key.
Retrieved from "https://tales-from-the-tower.fandom.com/wiki/Study?oldid=7838"
Community content is available under CC-BY-SA unless otherwise noted.