The Church of St. Michael is an edifice situated opposite the Vicarage of Charles Randall and can be accessed after having freed Hawk with the Key of Tears. Please note that access to all segments of the church can only be gained after having fully explored the Vicarage.

Stepping off the Tower gate, we're immediately greeted by a quartet of Belial's

Shadows. Once they've been dealt with, we can take a first cautious look at the church. Startling our unsuspecting selves, there's a

Spite dropping from the canopy, his demise will yield us a Coin

that we need to put into the collection box by the entrance. Apparently, the church is suffering from signs of dilapidation, especially the roof is in danger of collapsing. A desperate attestation to this, there's a

church fund pamphlet asking for donations required for its restoration. On the opposite side of it, we find a stoup containing some Holy Water (†).

Stepping inside the actual building, we notice puddles of rainwater on the floor, giving us an indication of the roof's meagre state. As our gaze is wandering over the interiour though, we find that the stained glass windows are a marvel to behold and the alley of lit candle stands leading to the chancel manages to uphold a vestigial aura of solemnity despite the general dilapidation.

To the left side of the double-winged main doors of the church, there's the panelled entrance to the locked Belfry: the required

Key can be found, hidden between the pages of Florentine's second Journal, inside the room left of the Vicarage entrance.
Moving up the Belfry, we gather a delicate jewelled Tiara

from a small table that's covered with knife or claw marks, placed next to the unattended bell rope. Another flight of stairs later, we find a plain iron key

Returning downstairs, we proceed along the pews further into the Nave. Passing by the Altar with two candles and a cross, we find ourselves drawn to the mesmerizing stained glass window in front of us, which depicts the scene of Saint Michael as he's casting a demon out of Heaven. A cutscene will be triggered,

Glass Memories, in which Adam and Rebecca witness the descent of two Feathers, one red and one green, the decision between the two will be of a later relevance. From the Pulpit we gather someone's handwritten

Notebook, containing thoughts on the archangels Raphael and Michael.

For a more detailed look at the Lapy Chapel and its theological background, please refer to the separate article page.

To the left side of the Chancel, there's a small room that's partitioned from the rest of the church by an extravagant, finely worked wooden screen, which can be opened with the

Key we picked up inside the Belfry, revealing itself to be a Lady Chapel.[1]
On the Communion Table we spot a

Madonna statuette. Upon closer inspection we find there's a ring of discoloration around the Madonna's head, prompting us to place the jewelled

Tiara on it. The wooden base of the statuette features a small indentation and two engraved feathers. Brooding, our attention is drawn to a mural that's covering one of the room's walls, depicting a gate and two angels (one with green wings), giving us the sought-after clue as to which feather to insert. Nota bene that mistakenly choosing the red feather will spawn two major

Yielders. As we put the green feather into the small aperture, the mural will open, acoustically accompanied by a short monastic sort of chant, and reveal a casket that contains Aelf's Helm. In the following cutscene,

Aelf - the Dragon Helm, we once again meet our valued confidante Aelf, informing us that his helm serves as our passport to the Realm of Divinity, Arqua, where we shall find the notorious Sword of the Dragon, Eternity. He kindly leaves us with 2

As our business in the Church is finished now, we step on the tower gate and make haste to reach our next destination, Arqua. If you wish to follow this walkthrough chronologically, please click on the following icon to continue reading about our search of the portal to Arqua inside the Tower.

Outside impression of the church.

Church canopy, collection box with a few coins in it.

An example of stained glass, depicting St. Michael as he casts a demon out of Heaven.

Nave, Lady chapel entrance on the left, lectern with notebook. 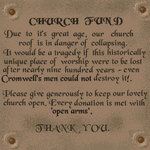 St. Michael.
Casting the Devil out of Heaven.

Angel.
Reminds Adam of his mother.

Apparently four angels with trumpets. Maybe inspired by Albrecht Dürer's The Four Angels with the Trumpets.

One of Helston's most prominent features, the Parish Church of St. Michael, is a large rectangular building of Elvan stone, with granite dressings, which was erected in 1763 by Francis, second and last Earl of Godolphin, as a replacement of an earlier construction which had been struck by lightning in 1727 and had burnt down in the process. Also, the church in Helston was originally a daughter church to the mother church in Wendron. In 1845, Helston had grown sufficiently in population to justify the parish of Wendron being divided into two parishes, something that happened in many places.

[2]"St. Michael's consists of chancel and nave with galleries on three sides, south porch and a western tower 96 feet in height, built of granite ashlar, in three stages, and terminating in a quatre-foiled parapet with pinnacles, containing 6 bells. In 1763, the Earl of Godolphin also donated a massive 24-branch chandelier. Attached to the door of the south porch are brass effigies of a man and his wife and three children, and on the wall above is a brass plate inscribed to Thomas Bovgins, merchant, ob. 1602; there are memorials to the Glynn and Grylls families, 1771-1834; to those of Moore, 1782-1806; Borlase, 1837-43; Trevenen, 1810-38; Pasmore, 1837-62, and others; the stained east window was a bequest by George Simon Borlase, who died 19th March, 1837, and there is a memorial window to Thomas George Davey, who died in South Africa 1889; the organ was erected in 1868 at a cost of £500; the church has been thoroughly restored and re-seated, and has 900 sittings. In the churchyard is a sun-dial raised on a pillar of granite, with the town arms and the date 1792; an ancient cross is built into the wall at the entrance."

While the in-game St. Michael's is characterized by stained glass windows depicting St. Michael himself as well as various angels with instruments, the stained glass window in the actual church shows two angels dancing the Furry Dance. The Furry Dance or Flora Dance, respectively is one of the oldest British customs of both Pagan and Christian background and takes place every year on May 8 in celebration of the advent of spring. On the same day is held the Feast of the Apparition of St. Michael the Archangel, the patron Saint of Helston who is said to have appeared on this day in the year 495 on what is known today as St. Michael's Mount."

Retrieved from "https://tales-from-the-tower.fandom.com/wiki/St._Michael%27s?oldid=8942"
Community content is available under CC-BY-SA unless otherwise noted.