The 6 News Cuttings can be found on the notice board in the cell, where Adam is held prisoner by Belial. 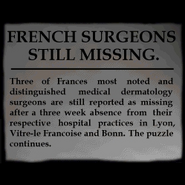 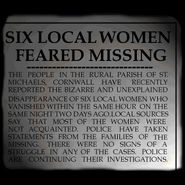 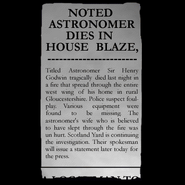 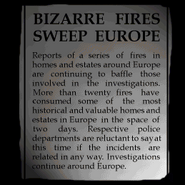 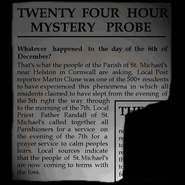 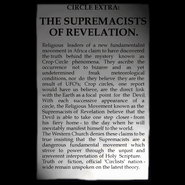 Three of France's most noted and distinguished medical dermatology surgeons are still reported as missing after a three week absence from their respective hospital practices in Lyon, Vitre-le Francoise [sic] and Bonn. The puzzle continues.

The people in the rural parish of St. Michael's, Cornwall have recently reported the bizarre and unexplained disappearance of six local women who vanished within the same hour on the same night two days ago. Local sources say that most of the women were not acquainted. Police have taken statements from the families of the missing. There were no signs of a struggle in any of the cases, police are continuing their investigations.

Titled Astronomer Sir Henry Godwin tragically died last night in a fire that spread through the entire west wing of his home in rural Gloucestershire. Police suspect foul play. Various equipment were found to be missing. The astronomer's wife who is believed to have slept through the fire was unhurt. Scotland Yard is continuing the investigation. Their spokesman will issue a statement later today for the press.

Reports of a series of fires in homes and estates around Europe are continuing to baffle those involved in the investigations. More than twenty fires have consumed some of the most historical and valuable homes and estates in Europe in the space of two days. Respective police departments are reluctant to say at this time if the incidents are related in any way. Investigations continue around Europe.

Whatever happened to the day of the 6th of December?
That's what the people of the Parish of St. Michael's near Helston in Cornwall are asking. Local Post reporter Martin Clune was one of the 500+ residents to have experienced this phenomena in which all residents claimed to have slept from the evening of the 5th right the way through to the morning of the 7th. Priest Father Randall of St. Michael's called together all Parishioners for a service on the evening of the 7th for a prayer service to calm people's fears. Local sources indicate that the people of St. Michael's are now coming to terms with the loss.

Circle Extra: The Supremacists of RevelationEdit

Religious leaders of a new fundamentalist movement in Africa claim to have discovered the truth behind the mystery known as Crop Circle phenomena. They ascribe the occurrence not to bizarre and as yet undiscovered freak meteorological conditions, nor do they believe they are the result of UFOs; crop cirles, one report would have us believe, are the direct link with the Earth as a focal point for the Devil. With each successive appearance of a circle, the Religious Movement known as the Supremacists of Revelation believe that the Devil is able to take one step closer - from his fiery home - to the day when he will inevitably manifest to the world.
The Western Church denies these claims to be true insisting that the Supremacists are a dangerous fundamental movement which strive to power through the unjust and irreverent interpretation of Holy Scripture. Truth or fiction, official 'Circlists' nation-wide remain unspoken on the latest theory.

Retrieved from "https://tales-from-the-tower.fandom.com/wiki/News_Cuttings?oldid=8143"
Community content is available under CC-BY-SA unless otherwise noted.