Eternity (also called Sword of the Dragon) is a powerful, magically charged sword which originally belonged to Aelf. It is connected with the

Shrive, and both together serve as the key to the Soulstone.[1]

Only those who have been marked, whose hands have been branded with the symbol of the Shrive, may take the sword, otherwise they will be burned on touch.[2]

As a weapon, Eternity can either be used in melee combat similar to the rusted Broad Sword we took from the weapon rack in the Study, or alternatively as a ranged weapon, shooting a powerful, magical missile at the opponent. The second attack is only available in its loaded state, as indicated by the sword's purple colour on the upper section of the HUD.

Centuries ago, Florentine took the sword from the Soulstone and thus performed the first step in unsettling the balance of the universe. As related in his Journal, after having removed the Sword, he cannot touch it anymore without being burned, hence he decides to stash in a secret spot in the Cottage.[3] A couple of days later, on January 29th 1330, the Sword has disappeared from its secret stash and Florentine has not managed to retrieve it again ever since.[4] In later entries of his Journal, he repeatedly writes about having recurring dreams about the Sword.

Rebecca hereby freely quotes from Robert Jordan's Wheel of Time series of fantasy novels, where it appears as a proverb inherent to the Shienaran race of people.

This line apparently is not an invention by Jordan, though, but seems to originate from the codex of the Japanese samurai, as suggested by GOG forum user Lafazar.

Here's the excerpt from Robert Jordan's The Great Hunt, Book Two in the Wheel of Time series:

Looking further into the origins of this saying, I've come across two illuminating explanations, stating that the quote has been misattributed to Jordan:

Painting of Florentine and Eternity, as shown in the Making-of. This is not present in the actual game. 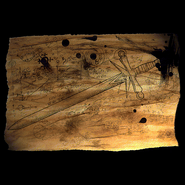 Sketch of Eternity, with an ink smudge on top of the pommel. Found in Florentine's Observatory.
Add a photo to this gallery

Retrieved from "https://tales-from-the-tower.fandom.com/wiki/Eternity?oldid=8826"
Community content is available under CC-BY-SA unless otherwise noted.