Claude Florentine (*1264 in Lyon, France[1]) is one of the major antagonists in Realms of the Haunting. Under the pseudonym "Elias Camber" and disguised as a Cornish priest, Florentine first contacts Adam by pretending that he is an acquaintance of his father. Curiously, anagrams of his false persona include "Bears Malice" and "Macabre Lies"; additionally, the name "Elias" in its English pronunciation contains the same phoneme as the word "lie", confer Belial.

According to Hawk, Florentine has lost his soul a long time ago, in return for his assistance with the destruction of the seven Seals which guard the Soulstone. His actions were motivated by the desire to deliver the world into the hands of Satan.[2]

For this purpose, Florentine initiated the Temple of the Morning Star, an order of rogue templars, in 1316[3], with the intention to destroy the Seven Seals, open the Gate to the Abyss and call upon Satan's power. Thus, the Power of Satan can take a physical form on Earth before the Power of God.

As we can deduce from the meeting inside the Mausoleum, Florentine is apparently adept at necromancy. By using his walking stick, the head of which resembles a skull and appears to be embued with some sort of magic, he can summon

skeletons from the bone-scattered grounds:

On a slightly more sane note, Florentine is apparently quite fond of Darjeeling tea and Brandy.[4]

Taking into account the entry of June 19, 1521 in his Journal, there must have been an alliance between Florentine and Abaddon at some point in the past. Abaddon would reveal information on subjects such as the Shards and Seals, the Tower, and Raysiel. He would also endeavour to disclose the locations of the devices of passage necessary to travel to the other Realms. The events in the latter part of the game, however, indicate that their "partnership" changed for the worse. Infact, Abaddon who is by then held prisoner by Florentine in the Halls of Doppelgangis states that his sole concern is Florentine's humiliation and, thus, urges Adam to seek the Chamber of the Soulstone and restore the Balance.

Until the 20th century, Belial was a close confidant of Florentine, having saved the latter's life on multiple occasions. Over the centuries though, their relationship started to crumble, partly because of Belial's often secretive and inscrutable manners.

During our lengthy conversation with Hawk after having freed him with the Key of Tears, he refers to Belial as Florentine's shade, his Doppelgänger of sorts.[5]

Florentine first mentions Raysiel, guardian power of Raquia, in the entry of June 19, 1521. He wishes to speak with this Power but is not yet able to get in contact as he lacks possession of the device to enter Raquia - Aelf's Dagger. Taking into account what the Libary Guard says, however, there seems to have developed some sort of alliance between Florentine and Raysiel at one point, possibly because of Hawk who is held prisoner by Raysiel. Their communication apparently is accomplished via emissaries. Florentine would certainly want to ensure to keep Hawk in chains as he is supposed to be the new host for all Light and Goodness on the day of Armageddon.
Also supporting this hypothesis is a passage in his journal where Florentine speaks about a creature which he captured within the Chamber of the Soulstone and which "Raysiel now has [...] under the Key" (referring to the Key of Tears).

Towards the end of the game, it is disclosed that Florentine and Rebecca used to be in a romantic relationship with each other. Their contact, however, worsened and ended sometime in the early 20th century due to circumstances which are not entirely clear from neither Florentine's journal nor Rebecca's letters. The latter documents disclose that Rebecca used to serve as a priestess for the Temple of the Morning Star which was established by Florentine, and she would also locate and procure books for him. The four letters increase in desperation over the lack of response from Florentine.
During the ultimate gathering inside the Chamber of the Soulstone, Florentine pejoratively calls Rebecca a harlot and nearly chokes her to death which is, however, stymied by Aelf who pierces Florentine's chest with his sword. Rebecca then takes the last intact Shard and Seal from Florentine. 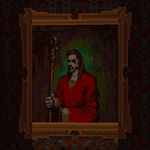 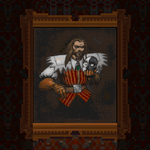 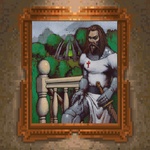 Florentine.
Dressed as a Templar.
Armoury.

Florentine's walking stick with a skull on top.

Concept artwork for Florentine. According to the PC Format #65 feature on Realms of the Haunting, Claude was supposed to appear "in different outfits, taken from various historical eras" and representing his great age.

Retrieved from "https://tales-from-the-tower.fandom.com/wiki/Claude_Florentine?oldid=8958"
Community content is available under CC-BY-SA unless otherwise noted.