The Caverns constitute the interlink between the House and Florentine's Observatory. Before entering the actual dungeon, Adam and Rebecca pass through some sort of Crypt, characterised by a rumbling ambient noise, various chest tombs and incense burners of Persian origin (as identified by Rebecca). Some of the walls feature murals with depictions of Angels. Here they are contacted for the first time by the disembodied voice of Hawk who asks them to restore the Balance by seeking the Chamber of the Soulstone.

The actual challenge of the Caverns consists in finding a

Red Gem and giving it as an offering to a

It's an arduous endeavour as the Caverns are an unsurprisingly dark and inhospitable area, filled with nasty creatures that spawn incessantly and pursue Adam and Rebecca into every nook, making navigation even more difficult. As such, the Map

that can be found on the bookshelf in the Mansion's Armoury is a valuable vademecum.

Proceeding downstairs and through a short alley of pillars with runic carvings, we enter the actual Caverns, and are warmly greeted by a disembodied voice saying,

after which several malevolent

Birdmen (referred to as Slanderers in the texture pack[1]) will start to appear with the firm intent of obliterating us. Our exploration of this dreadful place starts at a fork of three separate paths.

Keeping right we move down a flight of stairs and find ourselves in a basin below the water surface, the investigation of which yields us but a single

Blue Crystal (revealing itself to be a useless and treacherous red herring once we meet the guardian of the Caverns).

Returning to the upper section and traversing a small wooden bridge to the opposite side of the Caverns entrance, we pass through a series of hallways whose walls are covered with occult drawings, after which another series of wooden walkways leads us into a strikingly viridescent graveyard of sorts, filled with green crystals, surprisingly untarnished chains dangling from the ceiling, and a group of gravestones and crosses, from the centre of which a

Skeleton will arise and attack us. The inscriptions on the stones are hard to make out, eroded from the water in this place. There's a small niche with a pool of corrosive liquid which we should avoid treading into.

Leaving the graveyard we come across another staircase leading down into an area with more corrosive puddles, which yields us but a single

Box of Shotgun Shells from a dead corpse (Adam: "Dead by the looks of things." Rebecca: "Nice observation, Doctor Randall."), as well as another deceptive

Blue Crystal. Backtracking to the entrance of the Caverns, we'll now take a gander at what amenities the left path has in store for us.

By taking the left path, we come across a "gestating" (using Adam's wording) spot of sorts that's filled with spider webs, where all the

Slanderers seem to spawn from (probably constituting the "warren" mentioned in the monsters' welcoming speech), hence we make haste to leave this particular section until we come across a junction.

Path to the Red CrystalEdit

Choosing the left path, a series of wooden walkways and platforms will lead us into a den filled with more nasty Slanders and featuring a magically charged stone plinth with a

hand symbol, from which we gather the

Red Crystal, the required gem for the Guardian of the Caverns. By backtracking across the bridges, we spot a staircase to our left. Fumbling about in the dark basin, we eventually reach another flight of stairs that lead us back up into a ceremonial chamber, characterised by pillars that bear runic carvings and various candlestands for us to light. Placed on an altar, we gratefully take 1 valuable

Red Potion. Drawn by a familiar humming noise, we peek behind the altar and spot a teleporter (along with 2 Magazines

for our Colt-45), which serves as a shortcut to a small den, described below, allowing us to quickly proceed to the red Guardian of the Caverns.

Path to the Guardian of the CavernsEdit

Hugging the right wall, we spot a small opening to our right, leading into a small room with another pool of corrosive water and a tower gate (though Rebecca will comment that the design differs), that connects to the afore-mentioned ceremonial chamber. Exiting this little den and following along the path, we cross a series of wooden walkways and discover another

Shotgun Cartridges in an alcove to our left. Proceeding forward, we eventually reach a

Red Effigy, the guardian of the Caverns, inquiring the offering of a benefaction before allowing us to cross the bridge beyond:

Inflicting damage on the Guardian, the creature will shoot a damaging magical missile at us.Edit

Overboldly calling ourselves master of this place, we'll be attacked by various Slanderers.

Calling out our name and asking for the right of passage, we have to place the correct gem into the Guardian's claws.

Offering the Guardian one of the Blue Crystals, the creature will damage us.Edit

Offering the Red Crystal, the creature will lower the bridge (and disappear in the process), allowing us to enter Florentine's ancient Cottage and Observatory.

Alas, our hardships are not over at this point, as crossing the bridge and moving up a series of stairs will lead us to a platforming section, in which we're additionally confronted with an

Icon. After successfully manoevring over three moving platforms, we finally reach the entrance to Florentine's ancient Cottage and Observatory. As a friendly sort of taunt, the developers decided to implement an audio segment,

the disembodied laughter of children mocking us when we fail traversing the moving platforms. If you wish to follow this walkthrough chronologically, please click on the following icon: 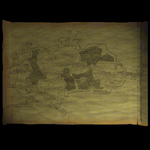 Map of the Caverns.

The crypt preceding the actual Caverns, in which we're first contacted by the disembodied voice of Hawk. Filled with incense burners, Angelic reliefs and chest tombs.

Entrance to the Caverns, featuring an alley of pillars with Runic carvings.

Graveyard in the Caverns.

Ceremonial chamber with teleporter, 2 Colt-45 Magazines and 1 Red Potion on the altar.

The bridge leading to the Observatory appears after we have offered the Red Gem to the Guardian.

Retrieved from "https://tales-from-the-tower.fandom.com/wiki/Caverns?oldid=7282"
Community content is available under CC-BY-SA unless otherwise noted.