The Angel motif appears in numerous instances within the game, mostly in the form of visual representations, providing a certain symbological interest.

At the very beginning of our exploration of the Mansion, our eyes fall on a book that lays on a small side table in the entrance hall, potentially a copy of Thomas Wolfe's Look Homeward, Angel. The title itself also appears in a pastoral elegy by British poet John Milton, named Lycidas:

Behind the Holy Shrine displaying the Creator's Staff and the Shrive, there is a large mural with an Angelic motif. Additionally, in the long hall where we make Aelf's acquaintance, there is another mural depicting Saint Michael, as identified by the "Quis ut Deus" inscription below. The walls of the room in which Florentine demands we hand him the Shrive are covered with various confrontational scenes between Angels and Demons.

Angelic Mural behind the Creator's Shrine.

Marble Statue, which will turn into an inimical Slanderer after we've been given the Shrive and the Creator's Staff.

Detail of Angelic relief with the Latin inscription Quis ut Deus, a literal translation of the name Michael.

Inside the crypt which we pass through just before entering the actual Caverns, apart from the Persian incense burners, we find that some of the wall segments are covered with Angelic carvings and reliefs. 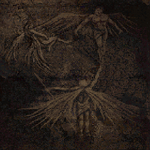 After opening the Sarcophagus in the Study, we eventually come into a large chamber, characterised by the pools of lava seething underneath the narrow pathway. Stepping onto the large mosaic of a chained angel in the centre, we're once again contacted by the disembodied voice of Hawk who had already beseeched us inside the crypt preceding the Caverns. Once we've acquired the Key of Tears from Raquia, the device to free him, upon inserting the key into the peculiar lock, the mosaic will break, serving as a visual representation of Hawk's release.

Temple of the Morning StarEdit

Behind the altar inside the Temple of the Morning Star, there's a large tapestry hung up on the wall, depicting a red-robed Lucifer[2] in chains.

Apart from similarities regarding their names, there are various hints that Aelf actually is some sort of manifestation of the biblical archangel Michael. Page 3 of the above-mentioned notebook reveals that Muslim lore describes Michael the Archangel "in wondrous and magnificent form with wings the colour of emerald green". Aelf's Helm actually bears two green feathers. The Qur'an also states that Michael is one of four archangels (the others being Azrael, Israfel, and Gabriel) and resides in the seventh heaven.

As we've already touched on above, another hint presents itself in the final section of the Mausoleum as Adam and Aelf meet for the first time. At the end of the hall we find an altar behind which is the relief of an angel. At the bottom it says, "Quis ut Deus", which is a Latin inscription often to be found on the shield of St. Michael and which translates as "Who is like God". Meeting Aelf in the just vicinity of the mural could be considered a juxtaposition.

The Church of St. Michael's

Inside the Lady Chapel of the Church of St. Michael, there is a mural showing two angel figures, one of them with green wings, which serves as a clue as to which feather we should put on the small indentation in front of the Madonna Statuette.

The finely-worked stained glass windows of the church also feature numerous depictions of angels. The large window above the altar, in particular, is worth our attention, showing the Archangel Michael as he casts the Devil out of Heaven.

St. Michael.
Casting the Devil out of Heaven.

Angel.
Reminds Adam of his mother.

Angel with violin.
Reminds Adam of his father, who was apparently very adept at plaing the violin.[3]

Apparently four angels with trumpets. Maybe inspired by Albrecht Dürer's The Four Angels with the Trumpets.

Retrieved from "https://tales-from-the-tower.fandom.com/wiki/Angels?oldid=8323"
Community content is available under CC-BY-SA unless otherwise noted.